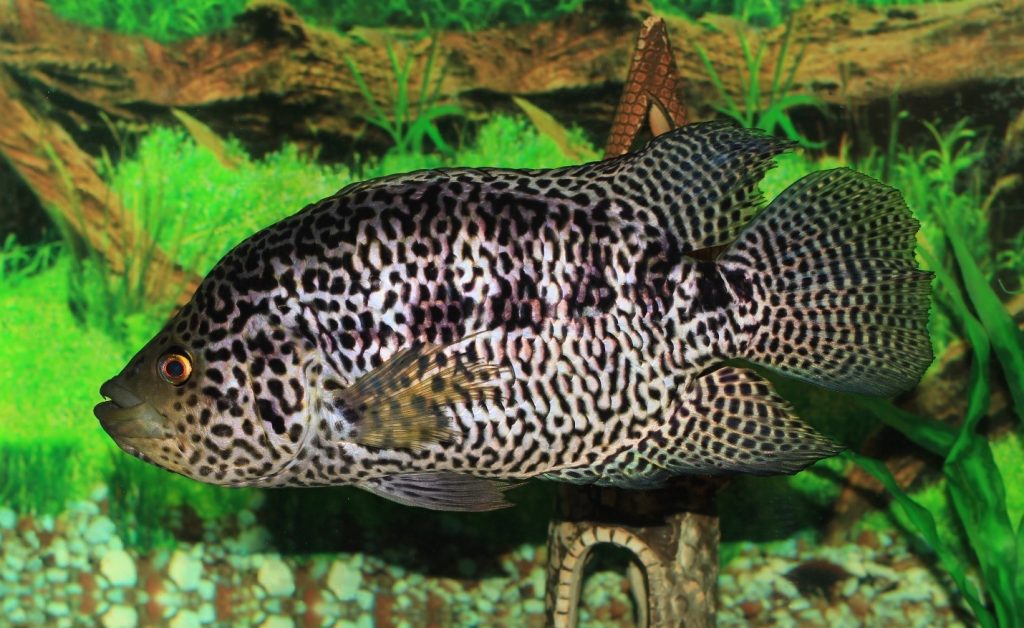 Adding new fish to your aquarium can be an intimidating experience, especially when you choose a fish as unique as the Jaguar cichlid. While other species can thrive in just about any conditions, this spotted swimmer has a personality that demands some special food and accommodation requirements.

For example, the selection process of the appropriate Jaguar cichlid tank mates needs to abide by a few rules determined by the particularities of the species. Because it is an aggressive predator by nature, you will need to be careful whom you pair it with. What is more, there are other things to consider.

The Jaguar cichlid is a species of freshwater fish that is scientifically known as either the Parachromis managuensis or the Cichlasoma managuense. Other popular names for this medium-sized swimmer are the Aztec cichlid, the Managua cichlid, the Jaguar guapote, the spotted guapote, and the guapote Tigre.

It is native to the still waters of Central America, especially the more tropical regions. In fact, the holotype of the entire species was discovered in the Lake Managua in Nicaragua, which explains its scientific denomination. Outside its native range, the Jaguar cichlid has been also present in the freshwater canals of Florida since 1992.

Its average size is of 22 cm, but males can grow as large as 35 cm in some cases. It has many purplish black spots all over its body and fins, and its sides have black squares. Both males and females show impressive, protruding teeth. The physical resemblance to the coat of the vicious American feline earned it its name.

Due to its vibrant appearance and bubbly personality, the Jaguar cichlid has become a rather popular fish in the aquarium trade. It is a great addition to any fish tank, but the fish’s needs make it unfit for beginners. Still, if you have been considering adding this fierce little guy to your collection, you should take into account some of its most notable particularities.

In the wild, Jaguar cichlids reside closer to the bottom of still bodies of water, hiding in the muddy depths. This makes them rather hardy and resilient, as they are able to withstand poor water quality and other hazardous environmental conditions. However, this doesn’t mean that you can stop paying attention to your tank if you fill it with cichlids.

In fact, waters that are too warm enhance their aggression, which you don’t want when you are trying to build a simulated ecosystem for your aquatic buddies. Therefore, it’s best to keep it around 25 degrees Celsius or below. And speaking of the species’ proclivity for hostility, one important thing to consider is its feeding habits.

Jaguar cichlids are highly piscivorous in nature, which means that they prey on their fellow fish. They prefer smaller targets such as exotic swimmers, as they are rather opportunistic in nature. They also consume aquatic invertebrates and insects, such as worms, snails. They have even been observed feasting on lizards occasionally in their natural habitat.

Simply put, the Jaguar cichlid will eat anything that is alive and fits in its toothy mouth. Thus, you need to be very careful during feeding time. Feeder fish are a suitable meal for them, as one mature specimen eats as many as ten swordtails in one sitting. You can also try cutting up pieces of crayfish and throwing them into the tank.

Dry food is also an option, along with bloodworms, earthworms, tadpoles, and crickets. Still, do not assume that the Jaguar cichlid will eat anything. Don’t try feeding it chunks of chicken or other birds and mammals. What’s more, their predatory nature makes them hard to pair with other tank mates.

When adding predators to a tank, it’s important that other fish have a similar level of aggression and size to prevent bullying. The Jaguar cichlid is a territorial and aggressive little guy that pairs well with other cichlids, such as the Midas cichlid, the Jack Dempsey cichlid, the Texas cichlid, and even the Red Terror in some cases.

The Jaguar cichlid is a medium-sized predator that can behave rather viciously if placed beside weaker fish. Fortunately, with the right food and appropriate tank mates, you can create a lively cichlid tank that is fun for the whole family. Just remember to keep water temperature on low, and all your aquatic buddies will be fine. Why You Need to Buy Your Cat a Cat Tree To understand what makes the best cat trees, we need to understand why cats love high places. I have 10 cats, and before I bought them a cat tree (actually 2 cat trees!), I would find them all over the house in the most unusual… For any hunter with a dog, to get the most out of their season, they must keep their companion in tiptop shape. The most common way of exercising a dog in North America is by going on the backroad or county road with a truck and asking the dog to run in front of the… If you are looking for a way to save time and money when it comes to grooming your doggy, then finding a good set of hair clippers for dogs may just be what you need. Particularly if you have a long-haired dog, the occasional trip to the vet for a grooming session is unavoidable. However,… Now that we have everything you need for your ratty- how do you choose one (or two or five) to take home with you? Of course, there is an infinite number of colors, ear styles, and sizes but personality, health and gender are more pressing issues to consider before appearance. First important decision- males or… Cancer is a cruel disease that takes millions of lives every year. Our beloved pets are not spared either. A comforting fact is that this health disorder usually occurs in senior animals. It’s not a widespread disease in cats, but it can happen. The most common types of carcinoma in cats are lymph node cancer,…