What is Cards Against Humanity?

This is one of the funniest games ever. You get a box of black cards and a box of white cards. The black cards are all question cards, and the white cards are all answer cards. The great thing about Cards Against Humanity is how funny the white cards are in answer to the black ones. There are plenty of cards in the original game, or you can get a Cards Against Humanity expansion to add even more madcap questions and hilarious answers to the mix.

The Cards Against Humanity Rules

The player whose card is chosen as the funniest by the Card Czar gets to keep the black card, and this becomes an ‘Awesome Point.’ Someone else gets to be Card Czar for the next round, and the game continues in this way. You can always play an extra card in this game if you have two funny ones, but you will be betting one of your ‘Awesome Points’ black cards when doing so. Keep the point if you win, or lose it to whoever wins instead of you.

Some black cards will say ‘Pick Two’ on and this means people play two white cards instead of one. These are handed to the Card Czar in the correct order (the order they will be read in).

Photo Credit: All product images are credited to Amazon or eBay

Have You Ever Played the Cards Against Humanity Game?

Cards Against Humanity the Game 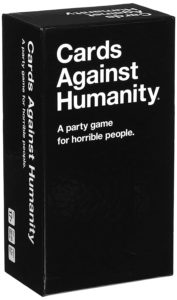 Rarely does a game get such consistent high reviews, but it seems Cards Against Humanity never fails to make people laugh. The concept of this game is so simple.

You have 90 black cards (those are your question cards) and 460 white cards (the answer cards) in the game. You also get game rules and alternate rules, and a box to keep everything tidy.

The questions and answers are printed on high-quality cards, and this is a game which you will want to play long into the night because everyone loves to laugh and the laughter this game provokes will go on and on!

If you are looking for the funniest game and your friends have a sense of humor, then consider Cards Against Humanity. There is nothing not to love about this classic party game.

Players can return any cards they do not understand as long as they confess this to the group.

Although Cards Against Humanity is already hilarious played the regular way, you can mix it up a little by adding a few twists to the rules. Instead of having a Card Czar, you could get people to read their cards and vote on the funniest.
Players can return any cards they do not understand as long as they confess this to the group. Instead of awarding an Awesome Point to the winner each round, the Card Czar could choose the top three and then they could be voted in order of funniness, so the winner gets 3 points, the second best gets 2, and the third best gets 1.

A ‘Survival of the Fittest’ adaptation could be that instead of picking the funniest card, the least funny is voted off, and then the last remaining card wins.

Something else you could do is pick one random white card each round and have an imaginary player. He gets Awesome Points just like everyone else, but imagine the shame if he were to win!

You can also make up your rule variations if you like. Just do whatever gets the most laughs. After all, this game is about having fun.

Other Cards Against Humanity Sets 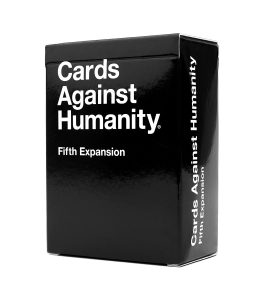 Playing Cards Against Humanity feels like you are sitting around telling jokes. You will want to play and play until all the cards are gone. But then what do you do? Well, you could always use the cards again.

Even if you do not get the expansion pack, the game will provide hours and hours of fun every time you play, but adding the expansion cards brings you, even more, mirth and laughter, which is why a lot of people choose to upgrade their set with the expansion. 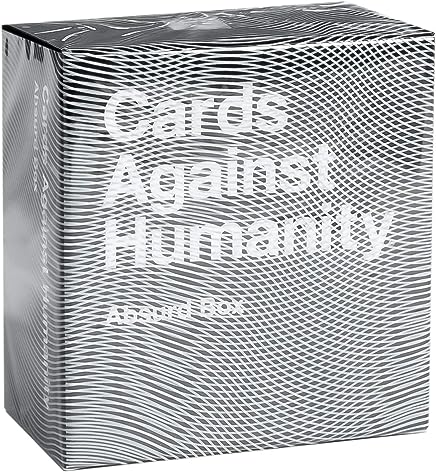 Cards Against Humanity is an adult game since a lot of the topics are a bit extreme for kids, but that is something that makes it even more fun. You never know what is coming next and the combinations of hilarious answers with crazy questions make this game what it is.

You do not need to buy the first expansion to use the second expansion, although you can if you like since you will end up with even more crazy questions and answers, and therefore more laughter and enjoyment.

Base set Plus First and Second Expansion Packs 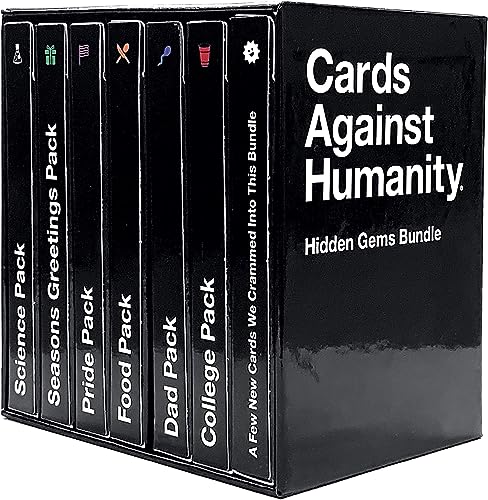 Although having both expansion packs is highly recommended because you get to have as many questions and answers with which to play this funny game as possible, as well as the blank cards you get with the first and second expansions.

This game is fantastic and always gets a laugh. If you are looking for a unique party game, try this one. One word of warning though – the humor can be very dark and twisted, so if you are not easily offended and you have a great sense of humor, you will love Cards Against Humanity.

Watch this video of “Cards Against Humanity – SourceFed Plays” Travel Beds for Toddlers – A Complete Guide Travelling with the 2+ year’s toddler has always been the biggest challenge for the parents. Though it is possible to buy the hotel accommodation for your entire family with separate bedrooms, however, those alternatives are not only expensive in nature but, also possess the security issues for…